Matthew Doyle has spent more than a decade working for the Labour party in government, first in parliament and at Labour party headquarters, and then as a special adviser in the Department of Work and Pensions and 10 Downing Street. 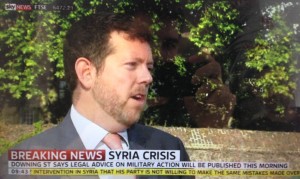 He continued to work for Tony Blair once he stood down as prime minister, from 2007-12, serving as his political director and spokesman across all his activities, principally his role as Middle East Quartet representative. 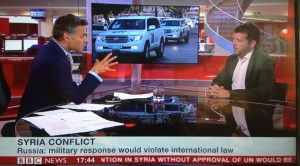 Matthew is now a regular speaker and media commentator, appearing frequently on the BBC, Sky News and Al Jazeera English about the Middle East and UK domestic politics. He is also a frequent contributor to Progress. 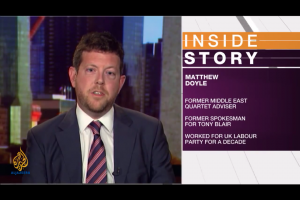 Below are links to a range of media appearances Matthew has made in recent years.

John Chilcot: Tony Blair was “not straight” with the public over Iraq war (BBC Daily Politics, 6/7/17)

A year on from the release of his report, Chilcot’s commented in an interview that Tony Blair was “not straight” with the public over the Iraq war. I argued that in the same interview Chilcott had said that Blair “hadn’t departed from the truth”, and, more importantly, he had previously absolved Tony Blair of any accusations of misleading either Parliament or the public.

George Galloway interviewed me following the speculation around a possible return to frontline politics for Tony Blair. I argued that it was important to ensure the voice of the 48% is listened to, and that today’s Labour Party leadership should not forget the success of Blair’s brand of pro-European, centre-left politics.

I reviewed the Sunday papers along with French TV journalist Benedicte Paviot. We discussed Jeremy Corbyn’s struggle to maintain unity withn the Labour Party, as well as David Cameron’s pledge to bulldoze one hundred of Britain’s worst “sink estates”.

Corbyn-support Shelly Asquith and I debated what advice should be given to Jeremy Corbyn ahead of his first Labour Party Conference speech as leader in 2015. I argued that, alongside demonstrating his undoubted authenticity, Jeremy needed to set out exactly what his leadership will bring, as well as to move on from some of his more controversial past comments, such as his dislike for NATO.

Following reports that Tony Blair was to step down from his role as envoy for the Quartet of Middle East peace negotiators, I discussed his record with Lionel Barber, editor of the Financial Times, arguing that Tony Blair had been a successful envoy in the Middle East.

I debated with David Elstein, the former chief executive of Channel 5, over the disagreement between the David Cameron and the broadcasters over debate formats for the 2015 General Election. I argued that the broadcasters should hold their nerve in the face of the PM’s apparent refusal to debate Ed Miliband one-on-one.

Should Save the Children have honoured war criminal Tony Blair? (BBC Radio, November 2014)

I was interviewed alongside Chris Nineham, from Stop the War Coalition, about Save the Children’s decision to give Tony Blair its Global Legacy Award. I argued that the award was entirely appropriate given it was based on the Blair government’s transformative achievements in Africa, as well as his work in the continent since leaving Number 10.

Following Fiona Cunningham’s resignation as special advisor to Theresa May in 2014, I explained that, despite their bad press, political advisors are crucial to ministers because government is political as well as administrative. Moreover, I argued that the bigger story behind Cunningham’s resignation was the bitter rivalry between two senior ministers, Michael Gove and Theresa May.

Along with Andrew Rawnsley and Joe Twyman, I discussed the impact that the Fixed Term Parliament Act will have on the final 16 months of the the 2010-15 coalition government.

The morning after the night before | 7 November 2012